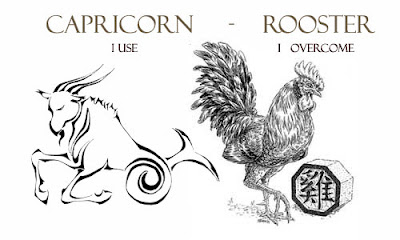 Dignified and impeccable, the Capricorn born Rooster cuts a dashing figure. He will be well turned out, strong of opinion and honest to a fault. Capricorn’s reserve matches the conservative side of the Rooster nature harmoniously. There is little conflict and lots of restraint. The Capricorn/Rooster possesses integrity and autonomy. He functions well alone if he has to. But he prefers to be surrounded. Count on the Capricorn/Rooster to do the “done” thing. This person’s charm is increased by his excellent manners, his careful use of words, and his ability to find the best in each situation. Capricorn/Roosters worry about how others see them and make heroic efforts to please those who judge their behavior. These people care greatly for appearances but are never guilty of pretension.

The Capricorn/Rooster is a born traveler. His alert mind and keen curiosity are forever sending him off somewhere to try new experiences. He’s jaunty and openly interested in meeting new people, hearing about different customs and learning about other cultures. As he or she is supremely presentable, the Capricorn/Rooster will be a frequent guest. People invite her to dine in the best restaurants and urge her to join them in Mediterranean spas and Caribbean watering places for a bit of fun-sharing. Her enthusiasm for novelty guarantees her host or hostess a willing and cheerful participant in all activities—especially meals!

The Capricorn/Rooster character is somewhat inflexible. It is nigh unto impossible to convince this apparent master of the concrete that he or she may have embarked on a suicide path. Capricorns born in Rooster years not only think they know best, they flatly refuse to take advice. Their lives will move ahead at a jagged pace, which suits their rather clumsy emotional structure. It’s no use trying to hurry them along or cheer them when they are down. “Time,” says the philosophical Capricorn/Rooster, “heals all wounds.”

Roosters born in Capricorn often complain of boredom. Routine is their enemy. So are formalities and red tape. Nothing infuriates a Capricorn/Rooster more than labyrinthine bureaucracy. He or she will simply not tolerate the filling out of intricate forms, the standings-in-line, the numerous hurry-up-and-waits that go along with securing anything official, from a marriage license to a theater ticket. In short, these busy folks love to go places but they don’t always adore the means one must employ to get there.

Of the Capricorn/Rooster’s many attractions perhaps the most outstanding is versatility. This character is accomplished at a wide variety of different pursuits. It is not unusual to meet Roosters born in Capricorn whose avid interest in medieval religious art overlaps their passion for raising the perfect Cabernet grape, their talent for baking bread, and their flair for occasional freelance brain surgery as well. These are skillful, accomplished people.


The art of loving, however, is one that doesn’t come easily to the Capricorn/Rooster. There is a separateness about these souls that incites them to maintain a certain distance from emotion. They are not wild about public display of affection, and although they feel deeply, they are hesitant about showing it.

Should you be in love with a Capricorn/Rooster, I suggest you learn first to deal with the bevy of close friends this gregarious person will have on permanent tap. There is no reason for jealousy in their regard. Your Capricorn/Rooster really loves you best. But through the smokescreen of his or her delight in being surrounded, you may have some trouble discerning that special tenderness. Keep busy and don’t demand too much attention. Better still, learn how to prune grape vines.


Your average Capricorn/Rooster is not very manual or artsy-craftsy. She will definitely not be the type to run up the curtains and make her own guest towels. He will probably steer clear of hammer, screwdriver and wrench. The Capricorn/Rooster likes comfort but cannot create it alone. He or she will be materialistic enough to want solid and traditional furnishings, but the interior decorating instinct is not one of this person’s main talents.

The Capricorn/Rooster is often a shade too otherwise-occupied to settle down and have a family. If he does have kids, he will not be too patient with childish pranks and will want his children to act as closely as possible like his adult friends. Capricorn/Rooster is an exacting fellow and doesn’t let his sentiments get ahead of his intellect.

This child will probably astound you with his many talents and his bright enthusiasms. Capricorn/Rooster kids are bright and sometimes cranky to boot. They need much patient affection and training, as they will go alone into the world to seek their fortunes.


The Capricorn/Rooster, like all Roosters, has his professional highs and lows. The variety of jobs he or she can do ensures that this person will be oft tempted to change careers in midstream. Naturally, if you know how to pilot a space ship and write symphonies, it follows that you might become confused as to your direction from time to time. Capricorn/Rooster is able to apply himself to difficult studies and achieve status and prestige in a chosen field. He or she will have difficulty asserting preferences and will balk at demanding favors or promotions. Capricorn/Rooster is self-destructively modest. He or she is not proficient at sports or jobs where physical prowess is required.

If authority is conferred on this person, he or she will carry out the role of boss scrupulously and in all fairness. She may be guilty of impatience with silly mistakes and especially with laziness on the part of subordinates. The Capricorn/Rooster drives himself very hard and cannot abide indolence in others. His innate desire to shine makes this person an asset to any employer. The Capricorn born in a Rooster year will give eons of good service—if he is not bullied. Bullying makes him quit on the spot. He hates people to take unfair advantage of power.

There are myriad career possibilities for this many-faceted subject. He or she might choose from optometrist, physicist, opera singer, ornithologist, auditor, tree surgeon, novelist, composer, talk show host, journalist, editor, set designer, geneticist. I could go on.