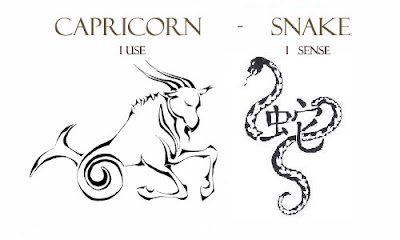 An arrogance and aplomb that would frighten Godzilla characterize this match. Capricorn practices what he preaches, puts his ideas to use and is not afraid of his own ambition. Snakes sense things, sniff out solutions and spend a large portion of their lives slinking in and out of crises on the way to the bank, the jeweler’s, the airport, their lawyer’s office or jail. Snakes often have more flair than brains. But with Capricorn as a mate, who needs brains?

The Capricorn born a Snake is in a class by himself. Not only does he feel superior to everyone in sight, but he also looks better than anyone else. These are stately people with built-in stature and class to burn. Their wardrobes alone cost half the national budget of Monaco—not to mention their cars and homes, their boats and their hairstyles.

Capricorn/Snakes are wildly loving of those less fortunate than themselves (everybody) and take in strays, adopt poor kids, hire on slothful employees, and the like. Some say they surround themselves with slobs so they will feel all the more superior. I don’t quite agree with that theory. Capricorn/Snakes are deeply caring. They are often born luckier than other people. Things come to them easily. So my theory is that Capricorn/Snakes like to share their wealth and don’t much care what anyone else’s opinions are.

This person’s very presence is powerful. Capricorn/Snakes are show-stoppers. They catch the eye of a whole room at once, and by their very carriage manage to keep it riveted on them until they are through basking in the attention. Oh yes. Attention is the Capricorn/Snake’s drug. He wants to be looked at, hugged, talked and listened to, scolded and spanked, and fed and bathed first. Nobody and nothing will be allowed to come between this haughty character and the audience he’s looking to get attention from. Real star quality.

The underside of the Capricorn/Snake’s grand generosity is his appalling wastefulness. These people buy three tuxedos for every one they might need to go to that charity ball next week. They’ll get two different kinds of car for your birthday, just in case you didn’t like the first one. Also, in their eagerness to please and preside, to own the moment in which they live, Capricorn/Snakes are not above any sort of ruse. If smiles don’t work then tears it will be, or fits of rage, hysteria or psychosomatic illness. They want to be noticed. At any cost. If they hate you, you certainly won’t be able to be indifferent to their distaste, either. They will find ways to remind you. Capricorn is a purposeful little critter. And Snakes are so darn clever. A brush with one of these monsters will never leave you indifferent.

There is, in every Capricorn/Snake, the gift of the supernatural. These people could probably live a very full life just following hunches and answering premonition’s call. It’s spooky but true. There is a foresight here unequaled by any other sign. Intuition is even too mild a word. The Capricorn/Snake senses trends, dangers, political movements, events of all natures.

As tough as nails and as sweet as pie, the Capricorn/Snake operates almost exclusively out of a thirst for power, for celebrity, for true greatness in the eyes of his  contemporaries. No posthumous kudos for this person! “Give me those dozens of roses right now,” commands the startling Capricorn/Snake. “I shall distribute them to people less fortunate than myself. ” And so she does. Off goes the Capricorn/Snake with her diva personality to draw crowds elsewhere, to throw kisses to her entranced audience, and to sow peace and love among men (as long as they live by her rules).

This character is so charmingly bossy you hardly notice you have been given the job as the head of the cleanup committee.


A romantic if there ever was one, the Capricorn/Snake is forever imagining himself “in love” with somebody. Every relationship that comes along feels as if it must be the perfect one. Each stray just needs a little fixing up here and there and before you can say “Mao Tse-tung” he or she will be the perfect lover or mistress, obedient and sane and healthy and brilliant by virtue of his ability to stand on his own feet. (Ordinarily, the people Capricorn/Snakes pick up are quasi-bedridden.) In other words, Capricorn/Snakes are promiscuous by default. They are always losing their lovers to dissipation and sloth. But not to worry. There are more where they came from. People go mad for this creature. He or she is never at a loss for tenderness. They are affection consumers. Capricorn/Snakes eat love.

If you love a Capricorn/Snake, you will be in awe of him or her. If you care to keep your Capricorn/Snake, don’t stay that way. This person ends up fixing his affections on the most demanding of his admirers. Capricorn/Snakes need to be confronted daily by a strong and severe judge who helps them get a bead on their mirror image, who knows how to reach their epicenter of softness and true enlightenment. All the scruffy strays in the universe won’t do. Capricorn/Snake needs a tough, no-nonsense partner who knows how to keep him or her in line and who, most importantly, doesn’t let him or her get away with duplicity. Fibbers to a man, Snakes must be constantly monitored for signs of dissimulation.


The Capricorn/Snake home will not be merely elegant. It will be a bastion, a model, a paragon of studied posh. And why do I even use the word “home” in the singular? Capricorn/Snake people never have just one house. At the very minimum this person will have a town and a country home. From then on, as they acquire the funds, they have one in the Caribbean, a little place in Goa and a condo in Saint Moritz. And the boat? That’s in the Bahamas. To this natural classicist, no number of Corinthian columns on the front veranda will be too many, no carpet too thick, no antique too dear. The best of everything for this character is never good enough. And messy? My God. Miasmatic in the dressing room. Never mind. The maid comes every day. Twice. Sometimes three times.

These people make wonderful parents. Having kids is a bit like taking in stray puppies. Capricorn/Snakes hover and comfort, and stay up all night and wrap their puking infants in the nearest sable stole at hand. Little Lauren or Jimmy should never want for anything. That is the Capricorn/Snake ideal—and if the nanny is nice, the kid is in good shape. Count on the Capricorn/Snake to be gone a lot of the time. When he’s there, he’ll spend intense quality time with the kids. But we are talking about a world-class busy person. The kid should be spared too much of the Capricorn/Snake parent’s vast shadow, anyway. It’s not healthy trying to live up to such a monolith.

The Capricorn/Snake child is first of all loving—graspingly so. Secondly he is loving—sweetly so. And thirdly he is loving—endearingly so. Most of all he likes to be the most adored child in the family. He needs all of his parents’ attention, and if he doesn’t get it, he finds ways. He is a dutiful child and very bright, of course. But if he isn’t first at everything he gets stomachaches, has nightmares, and bites his nails. This never lasts long, as the Capricorn/Snake child always triumphs sooner or later over whatever his or her family was. But while he’s small this kid must be nurtured as though he were a future prize orchid that takes twenty years to come to flower and in the meantime must be worn on your wrist—even as you sleep.


Most Capricorns born in Snake are destined for some form of prominence. They may be a political leader one day or they may just shine head and shoulders above their peers for some professional or humane reason. Whatever it is that gets them there, they get there. They sincerely believe that they are the best and the greatest at their craft or field, and because of this fervent belief, they often convince both themselves and others of that fact. Capricorn/Snakes aspire to greatness—and they often get it.

The Capricorn/Snake knows how to take orders if he or she knows it’s only temporary. These people are good workers (if they can get out of bed) and find brilliant solutions to problems for bosses who know how to use them properly. Capricorn/Snakes do not, however, want to remain employees forever. They like their bread buttered far too thickly to put up with floor-scrubbing for long. When they do get to be boss, they will play boss. There is never any question who runs the show and there is never any doubt the show is best run by Capricorn/Snake. The Capricorn/Snake should not attempt to slither out from under his destiny. It will only come back to haunt him.