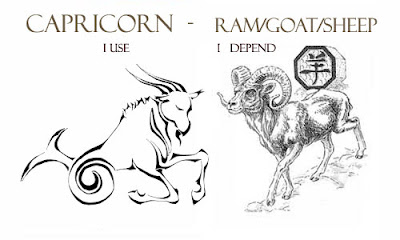 The normally lackadaisical Goat personality gets a run for his money when his birthright links him forever to the rigid, dependable, and ambitious Capricorn mountain-climbing Goat. The Chinese Goat and the occidental one are poles apart. The oriental Goat drips with sensitivity and thinks only of whimsy and invention. The other is an uphill skier whose ambition is to be ambitious. “Get there or die!” says the dogged Capricorn. “Ouch! My feet hurt,” whines the sensitive Goat. Inner discord is no stranger to people born under the dual sign of Capricorn/Goat. The push-me-pull you effect that two directly opposite vectors produce in this character causes him or her a lot of personal anguish. Capricorns born in Goat years know they must be serious. They work to get into a position of power. They struggle through studies and often come up the hard way, through the ranks. Both signs are persevering.

Lucky for the Goat to be born Capricorn. This addition of a little earth to the capricious Goat’s personality doesn’t spoil his high quality and even puts a fair amount of starch in his otherwise flimsy sails. Capricorn/Goats remain (for Capricorns) the crazies of the Capricorn race. But they manage to keep their feet on the ground about ninety percent more than other Goats. Of course, they pay for this security. Capricorn/Goats don’t have time to be as creative as they’d like. They are preoccupied with success. They are driven by a need for recognition. They are even a tiny bit pretentious and want to be rich enough to show off once in awhile. Naturally all the industriousness they must employ in the drive to become somebody in their chosen profession takes time away from invention. As a result, the Capricorn/Goat is given to daydreaming and imagining a better world wherein he or she would be able to fly or to paint or to play at Carnegie Hall or to win the Davis Cup.

In the long run, this person grows elastic. He or she will learn as time goes along to abstract the day-to-day and to live solely in anticipation of short periods of blissful irresponsibility. This Goat is too reliable for his own good. Since his dependability cuts down on his creativity, his Capricorn wisdom and sense of what is right gives this Goat a pain in the neck. But no matter how vigorously he denies it, his first duty is to his work. Capricorn sees to that from the word go.

What’s most delectable about this person is that although he is an almost religiously strict Capricorn (all the more severe because he is a convert), he knows better than all other Capricorns how to let loose. In his off-duty moments, you would guess him to be a wild-eyed Taurus/Dragon or at least a murky Scorpio. He loves to dance and sing and generally carry on. Capricorn/Goats have huge reserves of charisma. They are both elegant and sensitive. They love company. They covet power and they are remarkably verbal. They are spendthrift and rarely prompt.


Capricorn/Goat is a romantic idealist. He or she believes in fairy tales. Although these subjects will not be terribly verbose about lovemaking, they are eager and enthusiastic sex partners. The Goat born in Capricorn is given to great displays of affection through gifts or even pranks or loving surprises. No matter how serious they may seem, they are just itching to get out of their Capricorn suit and into their Goatly rags so they can rush off into the woods like Pan and woo little unsuspectors into their lair.

These people are mightily attractive. And promiscuous? Well, a little—no, a lot. But they know how to be discreet. If you love a Capricorn/Goat, remember he or she is a Goat. Remember that if you marry or live with one of these people you will most likely be (subtly, of course) wearing the pants. The Capricorn/Goat comes on very strong and seems to be authoritarian. But what he really wants is to be left alone to play with his toys and gambol through the woods. If you can improve his lot by undertaking the details of householding or bringing home the bacon, this person will not love you less for doing so.


When the Capricorn/Goat is at home, he wants it beautiful and well kept. Mostly, he’s out. This person is quirky. He is capable of suddenly deciding to renew all the furniture in the whole house. Out with the old and in with the new. Capricorn is, after all, the sign of the New Year. And Goats? Well, they are all whacked out of their skulls when it comes to material wealth. So burn the old couches and sofas or put them out on the sidewalk. “And the new furniture, madam? Where shall I put it?” “Why, on my American Express, of course,” says the Goatly Capricorn. Luxe and debt. The bylaws of the Capricorn/Goat home life.

The Capricorn/Goat child will have the potential to be the light of his parents’ life. Talented and creative, intelligent and whimsical, this kid’s winsomeness makes you want to chew him up alive. But try and get him to settle down to work on his math. This kid is a handful. Rewarding, and very, very conscientious about parents later in life. But when they are small, Capricorn/Goat kids know how to keep adults hopping. They should be disciplined early on and never allowed to think anything in life worth having comes cheap. This kid needs a sound religious education, too.


I hesitate to say that this person is a born leader. Yet, despite all the whimsy and the flimsy, this character is a veritable monument of magnetism. Properly applied, the blend of wise Capricorn and sensitive Goat is unbeatable. There’s something about the very disparity of characters involved that creates a synergy capable of uncanny attraction. The inventiveness of Goat can best be put to material use by the steady Capricorn. If the combination works, that is if Goat is controlled most of the time by Capricorn, the charge is electric, to say the least.

In a position of power this person will be just plain bossy. He or she directs operations almost by second nature. “Get me this and bring me that.” However, as the Capricorn/Goat is more humanitarian than he is bossy, his employees will adore him. He never forgets their birthdays and gives quick promotions for the sake of morale building. This person can be an employee. But not for long. Some jobs that might appeal to the Capricorn/Goat are: performer, physician, surgeon, politician, producer, dean of a university.