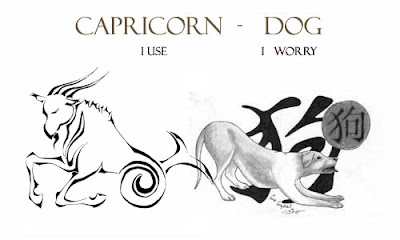 This is a flinty cobblestone of a person. A mixture of the cozy concrete and the cynical concrete, whose main aim in life is independence and peace-keeping. The Capricorn/Dog is relatively fearful of the abstract, the vague, the metaphysical, and spends a great portion of his life ensuring that what belongs to him stays where it belongs. To clarify, these people are cautious, conservative and conscious of society’s demands. They are far from snobs. Instead, they watch and worry while the rest of us debauch and destroy ourselves. The Capricorn/Dog loves order and wishes to preserve it.

Now, this strong-minded and revolutionary character is not above a good fight. If he or she believes firmly enough in an ideal, or must come to the fore to protect a family member or friend, his engagement in the fray knows no limits. The Capricorn/Dog seeks justice in a stony and scratchy manner. He is rarely guilty of extraneous diplomacy and cannot be accused of having excessive reserve, either. For a Capricorn, this person is quite outrageous. He’s given to barking—even baying—at the moon.

He’s spindly and agile. He’ll frequently be found performing some unusual act of ourage or daring uncharacteristic of both Capricorns and Dogs. So the force created by the mating of Dog with Capricorn gives us a conservative yet silver-tongued and magnetic human being. This person will disguise herself readily behind masks and throw up smokescreens so that we cannot tell who she really is.

Capricorn/Dogs are unique and mysterious. They are self-seeking but manage to hide this under a semblance of congeniality and even wit. Theirs is a biting humor. Sarcasm abounds. This Dog tears phoniness and facsimile to shreds. He wants the real thing out of life and—oddly for a shrinking Dog character—knows how to go after it. Normally these people have a gourmet streak. They enjoy fine cuisine and don't hesitate to indulge in it. Sometimes they make excellent cooks as well. They have a talent for respecting detailed directions in recipes and are born with regard for the way things ought to be. In later life, the Capricorn/Dog may develop a weight problem.

This native is capable of doing without. He is attracted by money and even by the luxuries it may buy. But comfort is secondary in the life of Capricorn/Dogs. They can exist as comfortably in a messy house trailer as in a palace. Something about their shiny veneer allows for a strain of carelessness in regard to luxury. They may drive an expensive car or ride around in an old pickup truck. It’s pretty much all the same to them.
These folks do, however, have a fancy side. Glitter and sparkle attract them. They are curious about the spangled life of show biz and fascinated by panache. Usually they do not go so far as to speckle their eyelids with sequins, but it’s been done.


The love lives of these metallic paper cutout people are very stormy and complex. Often the Capricorn/Dog will remain celibate for most of a lifetime. Not that he or she doesn’t enjoy sex, it’s just that it's so ... well, sex is so messy! The Capricorn/Dog has an almost compulsive cleanliness. He is not really attracted to complexity in emotion.

The stormy part comes from the fact that he occasionally tries to fit in romantically, gets married, or settles down to live with a companion. It just about never works. Capricorn/Dogs live for their independence. If they are tied up, they bark incessantly till somebody comes and frees them. Then they hide.

If you are in love with a Capricorn/Dog, you will surely find him or her interesting and never be bored. The Capricorn/Dog boasts a rich culture and cares enormously about refinement of the spirit. Your sex life might be a bit odd, as this character is a mite kinky. But surely you will never go without something to ponder. I advise you to feed this Rock of Ages person well, and don’t let him or her wear his mask at the table.


The family takes first place in this person’s heart. He or she may not be adept at creating a nest, but where the Capricorn/Dog lives is part and parcel of his personality. There will certainly be walls full of books. This subject reveres knowledge and loves to learn as much as to teach. The kitchen will be in good working order and he or she will want to own the right pots and pans for cooking matchless sauces and soups. As for living space, it probably won’t be very luxurious.

This creature is more cerebral than sensuous. His idea of comfort derives from whatever he can plunk down and sprawl on for the purpose of reading. The Capricorn/Dog parent cares for his children as a German shepherd dog cares for sheep. He moves them efficiently from place to place and keeps them rigorously safe from harm. He’s not the clownish or jolly type of parent who takes Kitty and little Matthew on the loop-the-loop. Rather, the Capricorn/Dog will spend a whole day building a sandcastle complete with moats and damsels in distress just to awaken his child’s love of history.

A little Capricorn/Dog will not be quite so austere as his grownup counterpart, but almost. You may sometimes wonder what makes this kid tick. He’s acerbic if scolded. He’s quiet and ever so nervous. Never you mind, he’s cooking up a future for himself wherein he will be independent of society, wear a disguise when he goes out in public, and ride around in a broken-down Ford for life.


The career of this weirdo (and Capricorn/Dogs are weird!) will usually take an intellectual turn. By the time he or she reaches college age, the Capricorn/Dog person has come to terms with the lack of desire for nose-to-nose contact and day-to-day routine in an office hierarchy. Hence the Capricorn/Dog may see himself in an academic career, writing and teaching in relative peace and quiet. Or he may find that even the university atmosphere weighs on his freedom-from-constraint center. In this case, the Capricorn/Dog may simply strike out on his own, become an artist or a Bohemian, a beach bum intellectual or a famous athlete.

I don’t know what kind of boss this person would be, but I suspect sarcastic and caustic. In any case, it isn’t likely to happen because the Capricorn/Dog hates authority in all forms. His political ideas border on anarchy. He can take orders so long as he doesn’t have to be pleasant to coworkers or answer the telephone gaily and cheerily.